The story of spring

I do not even remember my first contribution.

I performed it according to the drawings about two weeks after 18's birthday, at Zion Square in Jerusalem.

I remember the car, apparently, because I contributed to it several more times. Although I do not remember a specific talk about blood donation, at home and at school I was certainly taught to give to others.

So, of all the donations, she seems to me the most obvious - as long as I am qualified, it is clear that I will continue to donate.

The story of Anat from Ramat Gan

This is the moving story of Anat, an 34 girl from Ramat Gan who has become an active blood donor.

And so she tells us: All my life I was afraid of needles and blood tests, so blood donation was never an option for me.

After the birth, which went well, there was bleeding and they explained to me that I needed to get 2 doses of blood. I realized that my obesity would improve my condition because I was very tired, with headaches due to low hemoglobin, and most importantly - without the ability to breastfeed.

It turns out that in countries as distant as Africa, it is a privilege to receive blood. That's what they explained to me.
After receiving the blood doses the improvement was rapid and significant, the recovery was much easier, I went back to breastfeeding, and I felt like I was back to myself. If I had not received the doses of blood, recovery would have taken long and exhausting months.

Since then, two years have passed and every son's birthday, I have decided that my celebration is to go and donate blood, and I do so with a big smile and a huge sense of mission. I wholeheartedly recommend everyone to approach and contribute. It will change your life and the life so desperate for donations.

The story of Shimon Redlich

In 1965, a young man arrived from Ramat Gan on his bicycle to donate blood at Tel Hashomer Hospital

After his mother told him that the owner of the laundry in the neighborhood was sick and needed blood.

When he finished donating, the clerk in charge of the registrations arrived and started asking the donor about his personal details, name, date of birth, etc.

When he told her that he was born in April 1949 all the station workers stood up and were on the market - what? Boy 16 boy donated blood !!!!! !!!!! It is against the law and regulations !!
Oh well… passed safely after filling it with a jug of water.

and then…
One elderly lady who answered by the name "Nehama Berlinsky" initiated a blood test for this child.

When it turned out that he was rare B- she asked him if he was willing to join the list she had in her pocket with about 250 other people and would call him when he needed blood.

Well, the boy agreed in the place and joined the Blood Donor Organization, which was founded at 1936 in Tel Aviv.

Later he was secretary of the organization and later chairman for many years with rich activity and today he is honorary president with 103 personal donations.

Because this kid is me… Simon Redlich.

The story of Ron Fishbine

Somewhere in the mid-eighties, I was a soldier of 20. I suffered from hemorrhage in the digestive tract (a bleeding stomach ulcer).

Not that I knew it, but with every passing day I felt more and more weak, because I did not want to burden my colleagues with the unit. I did not go to the clinic until my commander made me do it.
All in all I arrived at a hospital with hemoglobin 6.2 and received 4 blood transfusions.
At that moment I made up my mind that debts must be returned, it is not that until then I did not contribute, I contributed but only one blood ration a year.

But since then I have been contributing several times a year and now 30 a year after the counter stands for 68 donations and hopefully for many more donations.

I was born to a father who from a young age told me that to donate blood is important and even took me with him to several donations. When he showed me his blood donation card, I was amazed to discover a large number of donations. I saw on his donation card that there was room to register 150 donations and at that moment I promised myself that I would achieve this goal.

Today, 24 / 6 / 2019, I contributed For the fifth time Blood and accident were excited about my arrival because an urgent order of blood of my kind had arrived. I do not have a rare blood type, which shows that all blood is needed. Do a favor to someone random and to yourself, you will find a day without action and jump on a short half hour drive to the blood bank near your home, both healthy and life-saving.

I too donated blood and saved human life!

The desire to help and influence is a value I was raised from home. In eighth grade I donated hair and felt it was an amazing act and that I wanted to save lives directly as well.
After inquiring about the issue I came to a blood donation. I immediately connected to the idea because blood donation can save the lives of three people, given the situation where blood donation is separated into 3 components - platelets, plasma and the fluid itself.
The only thing that stood between me and the desire was the fear I had at that time of needles. I confronted this fear in XNUMXth grade with the help of an amazing nurse thanks to whom I realized that my “fear” of needles was unfounded.
At that moment I realized that the path between me and the goal, the desire to donate blood is short and I was planning to donate blood on the 17th birthday.

Unfortunately the birthday fell on a maturity period, after which I flew to London for two weeks. When I returned, my mother told me that in a few days, a blood donation would be held in the city (Beit She'an) and if I wanted to come with her. I am not a spontaneous person, but I felt it was my chance and it was better to never be late.
I made a donation accompanied by my parents and a good friend and the amazing paramedic who was there saw that I was a little stressed and told to trust her, trusted her and found that blood donation was not painful at all and made me energetic knowing that I had saved three people in a small stab.

Since then, the rest is history. I donated a second time on 5/2/2020 (again was an amazing team) and planned to donate blood for the third time on the 18th birthday, in order to give life the day I got the chance to live myself.
In my worst dreams I did not imagine that my next contribution would be in the middle of a global virus, but precisely when I thought that the corona destroyed everything, knowing that everything "stopped", I focused on the really important thing, saving lives and more on birthdays.

I made a donation accompanied by a mother and a good friend and when I told the staff that it was my birthday everyone wished me good luck and many blessings and made me feel the most special
On this occasion I would like to Thank you to the amazing MDA teams Who always know how to say the right word at the right time, soothe, give a good atmosphere and make me think of the next donation as soon as the needle of the present donation comes out of the vein.

The story of May Hershberg

I remember the first time I donated blood.

That was when I was a soldier.
I've always hated needles, I didn't like to see blood (believe I'm not the only one), but blood is something that was also hard for me to see.
But if there's anything I like to do it Help and donate.
I am a person who always thinks of others before thinking about himself, because it is always important for me to help and give more.
So when I heard that a blood donation truck was coming to the base.
I knew and felt that it was something I had to, in fact, say, want to do it.
So I filled out a blood donation form and I wanted to do it, I felt proud But most of all, I felt happy because I knew that donating blood was something small, but it could help someone big.
And since that day every time there is a donation truck I go straight, fill out a form and want to donate.
Once I've donated a small portion, I know I've helped
And I will continue to contribute every opportunity I have.

The story of Shahar Tamir's contribution

Why are we telling you this? Because dawn is blind from birth, and it turns out that the blind (and not only them) must come with a companion to donate blood.
Shahar, a member of a blood donors organization for 21 years.
Shortly before the donation Shahar received a phone call fromAmnon Margalit, Active in the organization among the rest of his duties long ago phone people to come and donate.
In that conversation, which Amnon described as a long and moving conversation, Shahar said he was happy to come and contribute but had no companion.
It should be noted that Shahar, 45, has so far donated 45 doses of blood.

Amnon did not hesitate, and picked up the phone to the chairman of the Blood Donors Association, Yoav Bar Ze'ev, Who immediately volunteered to arrive and take Shahar to donate in a mobile that was that day in front of Tel Aviv University.

On this occasion, on which Shahar made his 46th donation, he received the organization pin.

Dawn works to Jay at nights at private events and paddles at sea during the day (from such a pun).
Shahar's couple also donated blood and began donating when they met 7 years ago.
Both have blood type B +.

After the army, Shahar began donating blood at the Magen David Adom station in Jerusalem, and when he moved to the center, he donated blood to the legendary donor, Esti at the MDA branch in Alkalay.

I spoke by phone with Shahar following the current donation, his story moved me and our decision in the organization to publish it here on our website.

The story of Itai Yaffa's contribution

I'm a member of a blood donors organization.
Yesterday, 26/7/2020, after a nine-year hiatus, I returned to donate blood.
Nine years ago I got cancer and at one point I stopped donating when I regularly donated paresis.
Needless to say, the roles have changed and instead of me donating to people who suddenly need I am the one who needs.
Yesterday I returned to donate and the staff at Rabin Square was amazing!
There were three stunning girlfriends to one call Joseph one Chen, I think, and the third I do not remember.
Strengthens your hands
With me.

Come to donate blood at Tel Hashomer with Waze

Donate to us with PayPal

Ask us on Telegram

The site was donated to the organization by the company Joinweb

The application server is courtesy of Intercloud

The application server was donated by a company Intercloud

The language translation service is courtesy of 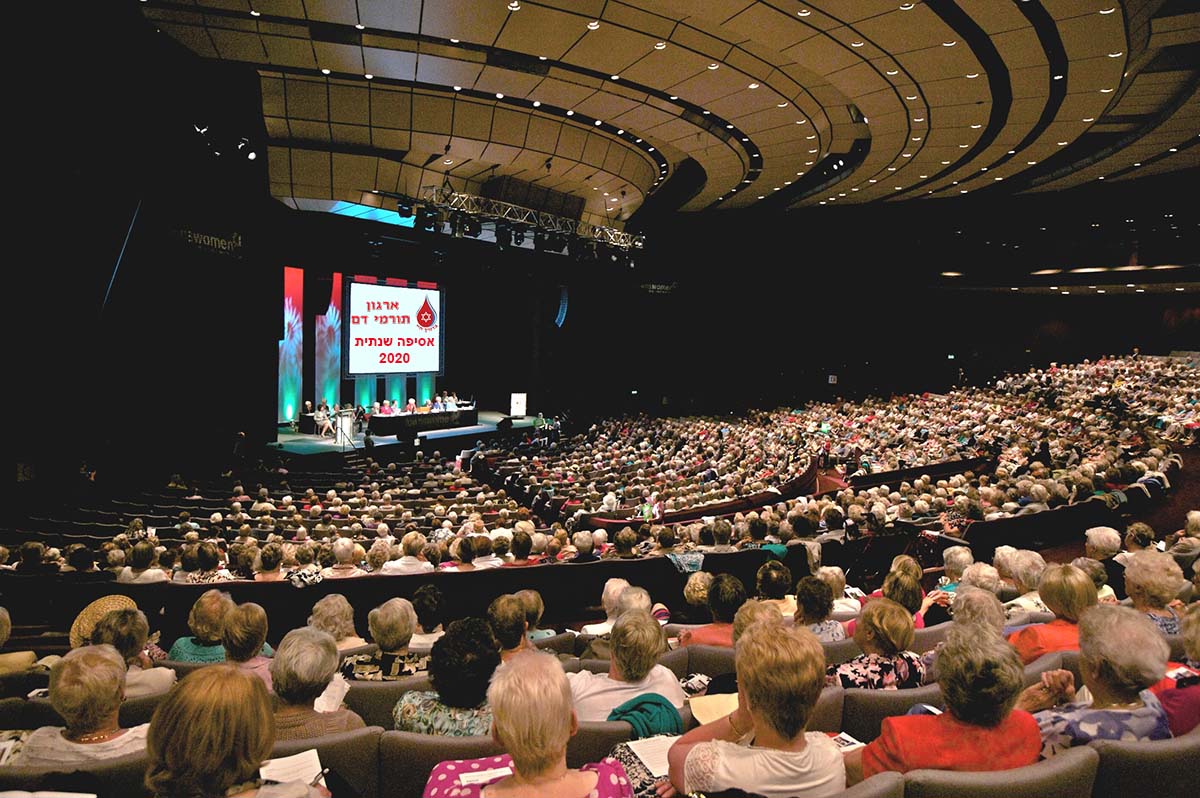 Members of the organization?
Click on the image to register for the annual meeting of